It Takes a Village to Save a Village 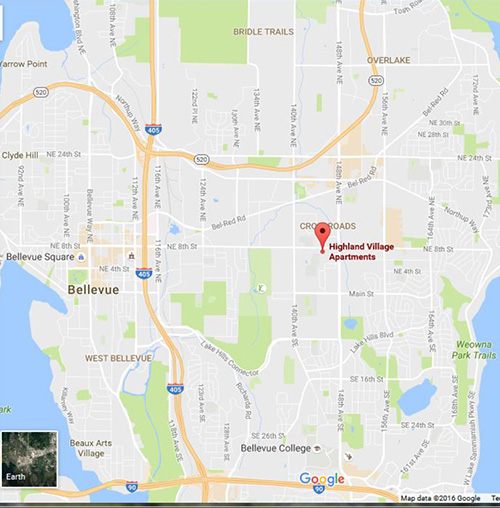 On August 5, it was announced that the Highland Village Apartments, where 76 low-income families live, would be bought by the King County Housing Authority instead of the feared purchase by a developer. Low-income housing was preserved. Below is a reflection by the Church Council’s Executive Director, Michael Ramos.

On the heels of the July 4th holiday, when all in the United States celebrated life, liberty and the pursuit of happiness, a Bellevue group of Latino families, immigrants and immediate descendants, faced a crossroads in their hopes for the “American dream.” They were forced to contemplate how as parents to tell their children that their home, their modest-rent Highland Village apartment complex, was soon to be no more. For the 76 households of this village, including 86 children, an uncertain future awaited them as a sale of the property to a developer pledging to build town homes priced up to $900,000 seemed all but confirmed.

Service providers, advocates and Highland residents gathered to ponder what recourse might be possible. Discussion revolved around the announced October 30 deadline to move and the small amount of $3,500 being offered to each household for relocation. One resident said that this would last for one month, when first and last month’s rent and a security deposit were considered. “Where will we go?” Such was the refrain, given the average rent in Bellevue (for a 2-BR apartment) of $1,690/month, but with available units going for closer to $1,900 and above. Getting a Section 8 voucher was not really an option, as a recent two-week window was only sufficient to one out of every 10 potential applicants onto a 3-year or more waiting list.  We were conscious that not only did these residents – 90% Latino – work in Bellevue, many of the children were in the school’s highly effective dual-language program at school. When children needed watching when a resident has to go to one of her/his several jobs on a given day, other residents were right there to jump in to help. “I have a family: this community!” as one mom stated.

The pending loss of home was unthinkable but real. Losing affordable housing apartment complexes in Seattle, Kirkland, Burien and elsewhere in the county happen all too often, contributing to a tragic legacy of displacement, dislocation, and disorientation. Indeed, Latino households in this area of Bellevue had fallen in half in the previous five years.

The voice of a resident was raised. “I don’t want to move from here.” A single mother, doing four jobs while raising four children, embodied the sanctity of the community that they had formed and the dignity that “they were Bellevue” too. The discussion shifted. They were finding the courage to insist that what they really wanted was to stay – to not have to move, out of Bellevue, out of the supportive network, “the village,” that they had formed.

Instead of focusing on what was adequate compensation for residents, now we discussed slowing down and stopping the process of sale and permitting. We agreed that a letter would be prepared and submitted to the City of Bellevue stating the case of the damage that would be caused by the removal of the units and the vacating of the inhabitants – the social costs and casualties of redevelopment, rarely factored in and even less acted upon. State Representative Joan McBride agreed to meet the residents. She affirmed that the “public health and welfare” was at stake. The City was reminded of its Housing Vision of “meeting the housing needs of its diverse populations, strengthening neighborhoods and communities.” The City heard the pleas of residents at council meetings and they responded.

I was struck by the grace and straightforwardness of the request of the residents. I could sense the care and concern of local service providers like Jubilee Reach and Bellevue Lifespring and agencies like SeaMar Community Health Centers. I could witness the indispensable advocacy and organizing capacity of individuals like Karen Studders and community organizations such as the Tenant’s Union. I was heartened by the love shown by Rep. Joan McBride.

Even as the residents had found their collective voice, still, the parties had to coalesce, only possible because they were strong in their conviction, determined to find a way. On Friday, August 5, a miracle took place. Smiles, hugs, and tears of joy erupted among the residents and their supporters as the King County Housing Authority announced that an agreement had been reached for KCHA to acquire Highland Village. The City of Bellevue, state representatives, King County Councilmembers, the County Executive and the King County Housing Authority all did their part and admirably. And the developer who was purchasing the property was willing to step away for the greater good. Complex financing for such a purchase does not come through quickly and yet, when push came to shove, mountains moved.

A pending sale to a developer once thought by some to be a “done deal” became a “new deal” that would allow these Bellevue residents to continue to live and thrive in the place that was home. “Somos Bellevue” – “We are Bellevue” – a message revealing the reality of a new identity for this largest city on the East Side. If these apartments could be saved here, it can be done anywhere. For the notion of affordable housing to have meaning in Bellevue – or anywhere in King County – these units needed to be preserved. If plans to end homelessness, create permanent housing, or provide wraparound supports carry any meaning, then these units needed to be preserved. !Si, se puede!  Yes, we can! The seeds of a movement may be born in the most unlikely of places, Highland Village in Bellevue, Washington. Do we have the will to read the signs of the times and seize the opportunities before us?

A small step for humanity; a giant leap for human community, built on a foundation of justice.

Oct
16
Fri
all-day 18-day Voting Period
18-day Voting Period
Oct 16 – Nov 3 all-day
October 16 is the start of the 18-day voting period (through Election Day). Ballots are mailed out and Accessible Voting Units (AVUs) are available at voting centers October 26 – Online and mail registrations must[...]
Oct
29
Thu
6:00 pm True Justice: Screening and Pane... @ Online
True Justice: Screening and Pane... @ Online
Oct 29 @ 6:00 pm – 9:00 pm
REGISTER HERE to join the Meaningful Movies Project, Northwest African American Museum, Kundhart Films, ACLU WA, and others for a screening and meaningful discussion of “True Justice: Bryan Stevenson’s Fight for Equality.” The film follows 30[...]
Oct
31
Sat
10:00 am Transformation in a Time of Unce... @ zoom - RSVP for zoom link
Transformation in a Time of Unce... @ zoom - RSVP for zoom link
Oct 31 @ 10:00 am – 12:00 pm
Sister Nancy Sylvester, IHM, will teach participants how to speak and listen from the contemplative heart that is necessary for transformational dialogue between people of differing perspectives during these monumental times. Learn More The Peace[...]
Nov
1
Sun
6:30 pm F.I.R.E. Interfaith Dialogue: Br... @ Zoom
F.I.R.E. Interfaith Dialogue: Br... @ Zoom
Nov 1 @ 6:30 pm – 8:00 pm
Fostering Interfaith Relationships on the Eastside (FIRE) invites you to our 15th Interfaith Dialogue on Sunday, November 1, 6:30-8:00PM. This Dialogue will be conducted online using Zoom conferencing. The topic for this Dialogue is “Bridging the Divide —[...]
6:30 pm United for Good Interfaith Prayer
United for Good Interfaith Prayer
Nov 1 @ 6:30 pm
In this time of trial and struggle, as we confront challenges to our health, our civil society, and our body politic, we are at a crossroads of conscience. And though the voices of vitriol and[...]
View Calendar
Add