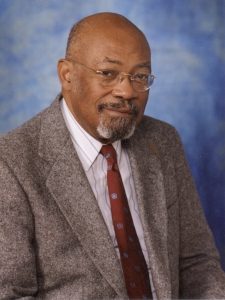 Our community lost a force for justice with the recent death of Dr. Hubert G. Locke. Locke was a scholar, activist, mentor, mediator, and advisor to public leaders across many disciplines. Locke’s life of service to the common good began as a minister in Detroit. As the civil rights movement bloomed, he was called into other arenas of community service and activism. His ability to combine an unflinching analysis of unjust power systems with a deep, practical compassion was legendary. He mentored hundreds of students and advised dozens of elected officials and community. Among the many organizations strengthened by his counsel is the Church Council of Greater Seattle. We honor his life and mourn his loss.

Locke arrived in Seattle in 1976 to serve the University of Washington, where he worked for more than two decades – as assistant dean of the College of Arts & Sciences, as vice provost for academic affairs and as dean of the Evans School of Public Policy and Governance. But long before he arrived in Seattle and long after he retired in 1999, Locke was a force for justice and equity, personal integrity and civil society. In 1966, he was convinced by black leaders in Detroit to accept a position created inside the police department, an experience which led to his publishing The Detroit Riot of 1967, his firsthand account of that conflict. He continued to study policing and law enforcement policy through out his career, serving on dozens of local and national advisory panels and boards, advocating for racial and social justice.

Locke pursued a passionate interest in the Holocaust and the Third Reich throughout his career, with six books and many publications on the topic. This study which informed his understanding of the importance of strong civic values and systems In a 1970 Stockholm lecture he wrote, ”If there is any hope for the world, it lies in recognizing and acknowledging our capacity as human creatures to wreak havoc and destruction on one another.”

A man of deep faith and persistent hope, Locke married and ministered to people of all beliefs. Locke advised the Church Council of Greater Seattle and many local churches on how to participate powerfully in the important conversations of our time. “In the friendliest way, he guided groups into thorny problems.” recalls Church Council staff member Beth Amsbary, “He exuded caring for all in the room – caring for us too much to let us stay asleep to the harmful oppressions around us.”

Oct
16
Fri
all-day 18-day Voting Period
18-day Voting Period
Oct 16 – Nov 3 all-day
October 16 is the start of the 18-day voting period (through Election Day). Ballots are mailed out and Accessible Voting Units (AVUs) are available at voting centers October 26 – Online and mail registrations must[...]
Oct
29
Thu
6:00 pm True Justice: Screening and Pane... @ Online
True Justice: Screening and Pane... @ Online
Oct 29 @ 6:00 pm – 9:00 pm
REGISTER HERE to join the Meaningful Movies Project, Northwest African American Museum, Kundhart Films, ACLU WA, and others for a screening and meaningful discussion of “True Justice: Bryan Stevenson’s Fight for Equality.” The film follows 30[...]
Oct
31
Sat
10:00 am Transformation in a Time of Unce... @ zoom - RSVP for zoom link
Transformation in a Time of Unce... @ zoom - RSVP for zoom link
Oct 31 @ 10:00 am – 12:00 pm
Sister Nancy Sylvester, IHM, will teach participants how to speak and listen from the contemplative heart that is necessary for transformational dialogue between people of differing perspectives during these monumental times. Learn More The Peace[...]
Nov
1
Sun
6:30 pm F.I.R.E. Interfaith Dialogue: Br... @ Zoom
F.I.R.E. Interfaith Dialogue: Br... @ Zoom
Nov 1 @ 6:30 pm – 8:00 pm
Fostering Interfaith Relationships on the Eastside (FIRE) invites you to our 15th Interfaith Dialogue on Sunday, November 1, 6:30-8:00PM. This Dialogue will be conducted online using Zoom conferencing. The topic for this Dialogue is “Bridging the Divide —[...]
6:30 pm United for Good Interfaith Prayer
United for Good Interfaith Prayer
Nov 1 @ 6:30 pm
In this time of trial and struggle, as we confront challenges to our health, our civil society, and our body politic, we are at a crossroads of conscience. And though the voices of vitriol and[...]
View Calendar
Add